When Women Call the Shots: The Developing Power and Influence of Women in Television and Film by Dr. Linda Seger 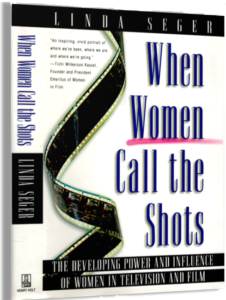 In When Women Call the Shots: The Developing Power and Influence of Women in Television and Film Dr. Linda Seger discusses how record numbers of women are working in all areas of the film and television and industries. Actresses are creating their own production companies in order to obtain better rolls and more control of their material. Women are creating TV shows to explore stories that were closely reflect their lives. There are more films about women and women’s issues and more money-making films with women protagonists. Change is occurring at every level and women are clearly having an impact that is reshaping the entertainment industry and the product it delivers. Who better to tell these changes and script consultant and author Dr. Linda Seger? Through interviews with key players such as Sherry Lansing, Dawn Steel, Gillian Armstrong, Marlo Thomas, Linda La Plante, Nora Ephron, Liv Ullman, Lorretta Young, Jane Wyman and many, many others! She shows just what a woman’s influence means in what we see and what we will see much more of in the years ahead, in movie theaters and on our TV screens and how in turn that power affects society. As Linda points out in the book, although much progress has been made, there is still a very long way to go for women in the film & television industry.

Commendations for When Women Call the Shots:

“A wonderfully comprehensive in-depth examination of women in our business,  illuminating to any woman trying to juggle career and family.”

“Linda Seger reminds us that women have a powerful base in Hollywood and that they wield the power with the confidence grace and humor that is changing the face of the industry read this book now no matter what industry you are in there is no turning back!”

A powerful, infuriating, illuminating, inspiring and insightful book! I’m recommending it to everyone both men and women.

Fascinating, informative and innovative approach and a provocative manifesto at the same time. Seger has added a useful tool to an ongoing examination.

When Linda Seger called the shots:

Think of any major motion picture, The Lord of the Rings: The Fellowship of the Ring, for instance. The success or failure of any film begins with the screenwriter’s ability to communicate their exact vision to the producers, directors, actors, and others involved in its production. Screenwriters often turn to script consultants, for advice in this process.

Dr. Linda Seger was the first person in the Hollywood industry to offer such a service. She began her script consulting business in 1981 based on her doctoral dissertation project of what makes a good script a great script. When Peter Jackson was just beginning his career, Linda helped him on his breakthrough film Brain Dead. He and other well-known filmmakers, from directors such as Ron Howard to writer Ray Bradbury have attributed their success to the insights they gained from Linda Seger.

Now retired, Linda became one of the most prolific writers on screenwriting topics. Her book, Making a Good Script Great, remains a staple for writers and many universities use it as a textbook in screenwriting classes. She has also become a sought-after keynote speaker and guest on many panels in the states and abroad. In fact, she has spoken and given seminars in over 30 countries!

Additionally, Linda has written many books on success and spirituality based on the wisdom she gained working in such a competitive and demanding field. She has garnered awards for her work in the film industry, including the Candlelight Award for being a Light to the Entertainment Industry, the Moondance Film Festival Living Legacy Award, a Lifetime Achievement Award from the Redemptive Film Festival, and the Pacific School of Religion Distinguished Alumni Award.

Seger earned M.A. degrees in drama from Northwestern University; in religion and the arts from Pacific School of Religion; and in feminist theology from Immaculate Heart College Center. She received a Th.D. from the Graduate Theological Union in theology and drama.