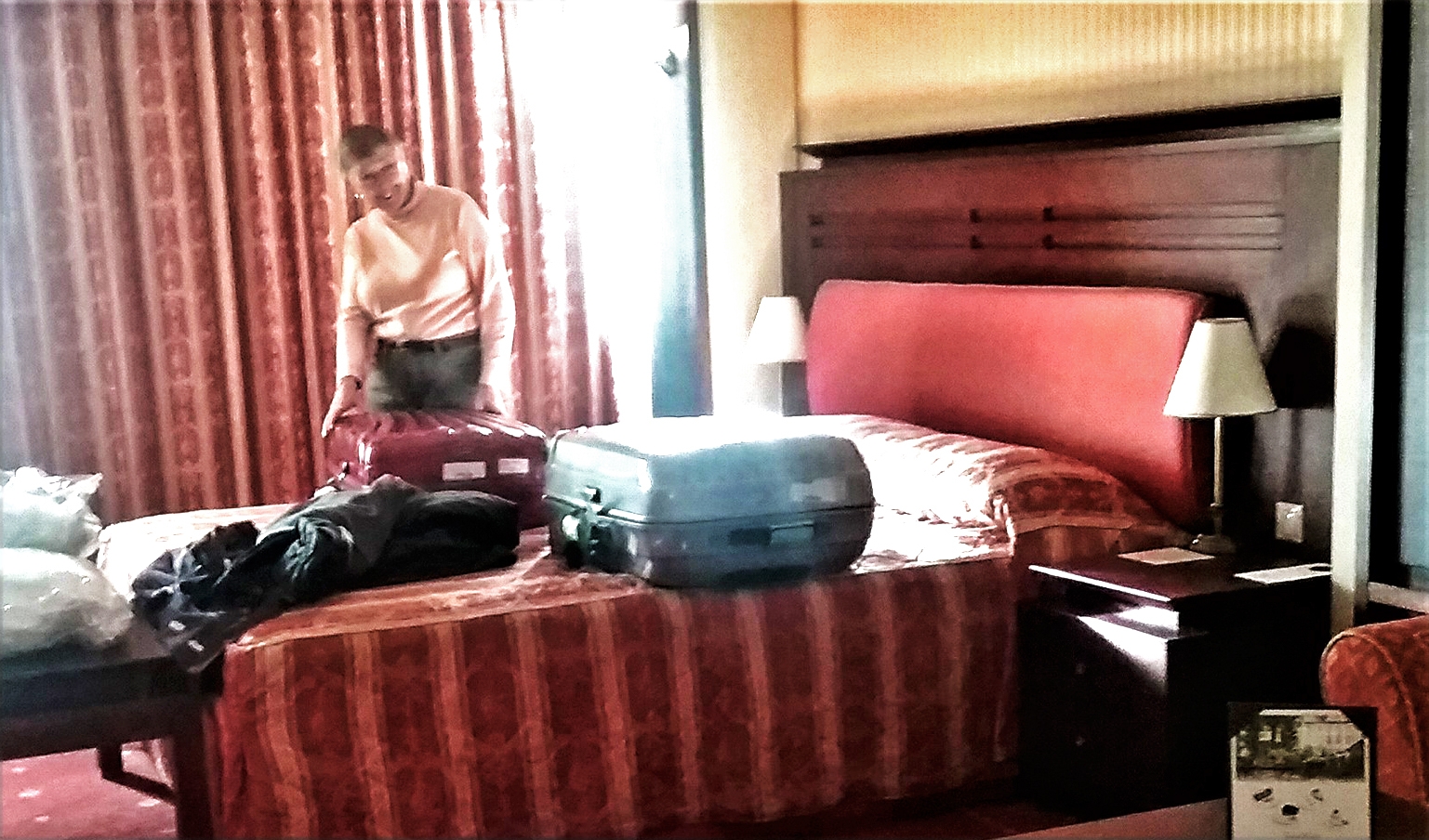 There is a strange thing that happens on a long trip and sometimes on a short one – things get lost in the suitcase. Sometimes they are found again (Link to Updates) – at times sometime later such as packing for the next trip and finding some little pocket or zipper or a corner where you never before put anything there, and for some reason you did it once and forgot about it. And sometimes things just disappear and you wish you were a fly on the suitcase that actually could see these mysterious happenings.

Peter and I tend to fairly carefully check the hotel rooms before we leave the hotel. And of course if they found something in the room, they always have our email and could let us know. So here is what we have lost on this trip:

Some little gifts we had to give to friends along the way – they were cute little sayings that you could hang on a door, such as: “you have a friend” or one I wanted to give to one of my friends which said “you are the strangest person I’ve ever met. We will be friends forever!” Yes, I have a friend in England – a comedy writer and singer who is quite adorable – who probably would’ve enjoyed that one.

We can’t find Katie’s birthday present – and her birthday was just a few days ago. Luckily I bought two of something that I really loved and I decided the Katie would like it and she absolutely loved it!

I have lost my Finnish adorable red knit hat. We actually think it was stolen at the theater on Wednesday night. We had a very odd group of people sitting behind us who were, in English terms, “somewhat dodgy.” We had turned away from our coats for a few minutes and when Peter went to get them, the man’s hand was on our coats and we think he might’ve slipped that hat out of the sleeve. I loved that hat because it was lined with fleece and I’ve never seen another one except in Finland and Latvia.

I can’t find a little gift that I got for the neighbor kids although I bought several so it’s not the worst thing – but I’m quite sure I actually bought two of those and I can only find one. It was a paper creche that I bought at Chartres Cathedral that was very sweet. Katie had asked for one because it reminded her of her childhood so she got hers, but the other one is just not there

We lost our carry-on luggage which we were forced to check instead of carry on Baltic airlines from Latvia to London. Since we were forced to check the luggage, our minds were so used to the two checked suitcases and the two carry-ons that when we went to pick up the luggage from the carousel, our minds thought of two and not three suitcases. We never realized it was gone until we got to the hotel. Neither of us thought of it – and it was like a suitcase brain freeze. And since nobody seems to answer their phones – such as Baltic airlines or lost and found – we weren’t able to get it before we left. But it has now been found and we just have to figure out how to get it from London to Colorado Springs. And no, we know the hat nor the scarf is in that luggage – too bad!

It is really easy to get angry at ourselves and wonder why a part of our neurons are not computing, but on the other hand, it was a long trip with lots of changes. And so it goes!

We are back home – totally spaced out and zonked and it took us 12 hours to figure out what time it was in Colorado.

The high points – the amazing people, some of whom were friends, some of who are friends now, some of them were waiters and people at hotels and colleagues and participants in the seminar. We felt befriended at every turn – by kindness and good humor and sweetness and care. The only thing we missed on this trip which we had last year, was going someplace that was totally about the scenery such as when we were in Switzerland and the Austrian Alps last year. We love to gaze – to just spend hours looking at beautiful scenery, such as we did with the Matterhorn in Switzerland last year. And on the other hand, we live in one of the most beautiful places on earth so we are gazing once again and feeling gratitude for the people in our lives here!

Happy to add this addendum with:

First of all, before we came home… Peter always brings his favorite instant coffee and a mug in the spoon. The housekeeper in Copenhagen Had taken the spoon out of the room – probably thinking that it belonged to the hotel. The hotel said they would give Peter another spoon but that spoon was not exactly like the one that he had that measured coffee perfectly, etc. but he said he would except their spoon and went to the buffet and went to the cutlery section and there, right on the top, was HIS spoon. It was just sitting there waiting for him, clearly different than all the other spoons. In Tallinn, Estonia, somebody took his mug out of the room, thinking of belonged to the hotel, and they search the kitchen and found his favorite mug! They offered him another mug and I told Peter he should have taken that one because that was a really nice mug and more special than his but he did get his favorite mug back!

BUT we have ALSO been reunited with our luggage. The airport sent it to the Colorado Airport here and we just picked it up and soon will get my hat back as well! Thanks to Kira Ann, a fellow script consultant, screenwriting teacher, author, and new friend. (I met her and her husband last year in London ) 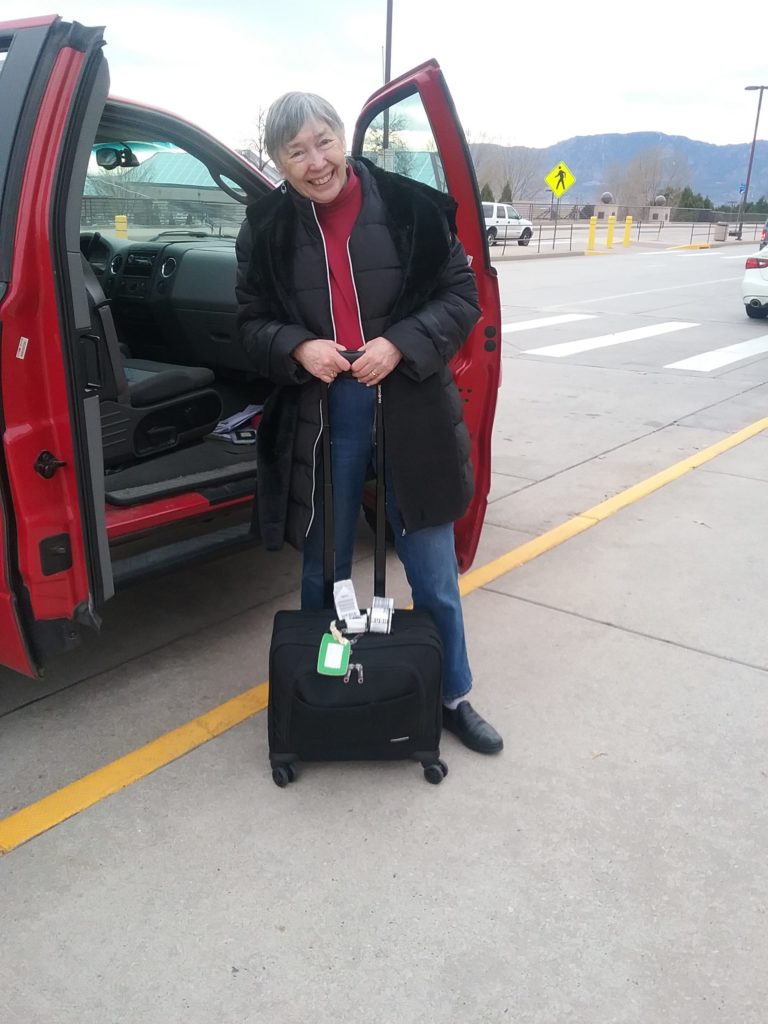